Yellowstone
Wendy Moniz is an actress, in the western genre best known for her guest apperances on Yellowstone.

In this TV series Moniz plays Governor Perry. Check out the list(s) and/or table(s) below to find out in which episodes she made an appearance. 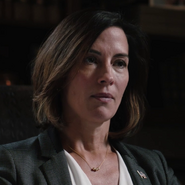