For other pages of characters with the same name see Rowdy.

Rowdy Yates is ramrod of the crew that drives cattle along the Sedalia Trail in the series Rawhide. Rowdy, portrayed by a relatively young Clint Eastwood, is one of the best cowhands working under trail boss Gil Favor and he is liked by his colleagues. Starting out as a young and inexperienced cowhand he shows talent and as a ramrod he soon learns to take the lead of the crew, finally ending up as trail boss himself.

When he was young Rowdy's father, Daniel Yates, left him and when they reunite in Rio Salado (Season 4, episode 1) they've been apart for years.

Early in life as a drover, Rowdy got ill. Some cows of the herd died and they suspected anthrax. He was cared for by a pharmacist's daughter and later the pharmacist himself. It turned out to be cow pox, an uncontagious illness he soon overcame. [1]

During the Civil War Rowdy fought with the Confederates. At one point he became a prisoner of war, along with his friend Buzz Travis. [2] Their platoon was captured by the Federals and sent to a compound in Arizona. Among the captured was Tom Bryan, who became a traitor in the eyes of his companions when he started to give their enemy his parole, promising not to escape. Bryan received preferential treatment while his former comrades were rotting in caves, 80 feet below the ground.

Rowdy and the others made a pact that the first to set his eyes on Bryan would "stomp his life out". While on a cattle drive, Rowdy and Bryan meet again and Rowdy is almost able to kill him, but is stopped by his boss and even changes his opinion about him later on. [3] 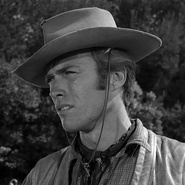