Rip Wheeler is a ranch hand on the Yellowstone Dutton Ranch, one of the biggest cattle ranches in the United States. He is essentially played by Cole Hauser, but Kyle Red Silverstein played a younger version in several flashbacks.

Rip Wheeler grew up near Miles City, MT, on a pig farm. His parents divorced when he and his brother were young. On July 14, 1997 Rip's father came to the farm to kill his sons and ex-wife. While his brother lay dead on the floor and Rip had been knocked unconscious, Rip regained consciousness and saw how his step-father was murdering his mother. Rip was too late to save anyone but himself when he cracked his father's skull with a frying pan, killing him. [1]

Afterward, Rip was found somewhere sleeping in a hay loft. The sheriff suggested that John Dutton of the Montana Livestock Association should have a look. Rip confirmed the story Dutton had heard about what happened. John Dutton decided then and there that he would give Rip a second chance and adopted him onto his family's Ranch. [1]

Rip has a soft spot for Beth Dutton, the daughter of his boss. Ever since he started to live on the Yellowstone Dutton Ranch in the 90's there has been a mutual attraction between the two. [2] As time passed, they went through good and bad times, but they were always drawn to each other again in one way or another.

Tension developed between Rip and Walker, another ranch hand invited on the ranch by Rip himself, when Walker took a liking to Beth as well. The two men kept a bad relationship until Walker left the ranch. [3]

When her father made her see it was unlikely Rip would ever propose to her, Beth took matters into her own hands. She asked her father's consent for the marriage and proposed to Rip when he came home after a bad day at work. She gave him a ring and offerd him her hand, saying: "The only thing I ask is you outlive me, so I never have to live another day without you." He calmly replied: "I can try and do that." Enough for Beth to declare it settled: they will get married. [4]

Even though they had been engaged for a while, they got married pretty impulsively once Beth had set her mind to it and had forced a Father of the Catholic Church, named McGreggor, to participate as the marriage officiant. Their marriage took place at the ranch house and John Dutton attended the ceremony. Rip's lifelong cowboying tutor Lloyd was the groom's best man and Rip's contemporary counterpart Carter was present as well. [5]

Click here for the main page of the Yellowstone Dutton Ranch.
Rip is marked with the ranch brand to prove he will accept "a second chance" after having killed his father. [1] Rip works his way up as time passes, eventually gaining authority over other ranch hands and even becoming the foreman of the ranch. John tells him to do "what is best for the ranch." Rip identifies his job as protecting the family. At the end of season 2, John indicates in a letter he thinks of Rip as a son.

Check out the table(s) below to find out in which episodes Wheeler made an appearance. 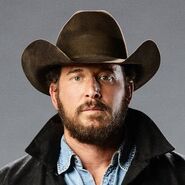 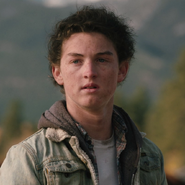 'It's Not a Secret Darlin', It's a Favor' Yellowstone Paramount Network