Pete Nolan is a Rawhide character played by Sheb Wooley. He is the scout of the cattle drive crew that is led by Gil Favor.

One time somewhere in Texas, Pete unknowingly took some arsenic when the men stumbled upon an almost abandoned house of a widow and he took some chocolate candy that lay on the table. Pete was in a bad state for a while, but with help from Wishbone (both cook and doctor of the drive) Pete was able to recover. It eventually turned out the arsenic was intentionally put in the candy by the widow to kill some Delawares appearing at her house because she felt threatened by them. [1]

Near Provo, Jackson County, Pete's horse spooked and as he fell off he was gored in his belly by a steer. Favor and Rowdy went to town to get the doctor but were held up in town. Pete had a fever but the men returned with te doctor in time to get his infection cleaned out. It would be a while before he would be back on his feet, but he was strong enough to recover. [2]

In his younger days Pete had a relationship with Nora Sage. He met her again while on the trail and wanted to rekindle their relationship but she told him she was not interested. He really knew they would never be together again when he heard she was found strangled later that day. [3]

During the Civil War Pete fought with the Confederates and he and Favor were at the Battle of Fredericksburg. [4] 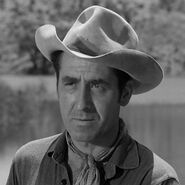