Nicholas "Nick" Jonathan Barkley is the hot-tempered younger brother of Jarrod Barkley, older brother of Audra and Eugene Barkley, older half brother of Heath Barkley, and son of Thomas and Victoria Barkley. His father was killed and Nick now manages the family ranch. He wears a black leather vest, large black hat and black leather gloves, and is distinguished by his brawling ways and loud demeanor. Nick served as a soldier in combat in the Union Army during the Civil War and is always ready for a fight and even fights with his brothers. Underneath his gruff exterior, he is fun-loving, has a great sense of humor, is warm, caring and loves his family deeply. Nick is portrayed by Peter Breck. - Source: Wikipedia 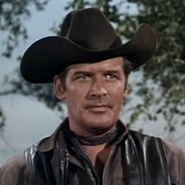