Monica Long-Dutton, granddaughter of Indian elder Felix Long, is a teacher and professor married to Kayce Dutton. She is played by Kelsey Asbille in Yellowstone.

Click here for the main page of the Dutton family.
Monica's ancestors had lived on the northwestern plains for centuries before finally ending up on the Broken Rock Indian Reservation. She herself grew up on a ranch [1] and had a brother named Robert. Her grandfather Felix Long is one of the Indian elders on the Reservation. [2]

She started her own family by marrying Kayce Dutton, the son of big cattle rancher John Dutton and his by then deceased wife Evelyn. Monica and Kayce had a son they named Tate and they lived on the Broken Rock Reservation. [2]

Her brother Robert and Kayce's brother Lee ended up facing each other in a feud between the Yellowstone Dutton Ranch and the Reservation. Robert shot Lee and was about to finish the job when Kayce interfered. He saw that his brother got shot by Robert, his brother-in-law, and had to kill him to protect himself and his brother. He soon found out he had not only killed his brother-in-law but was too late to save his own brother as his gunshot wound turned out to be fatal. [2]

Monica was hit when trying to stop a fight between two school boys. She passed out while recovering at home. [3] In the hospital it turned out she had suffered an epidural hematoma and she had to have brain surgery. [4] In time of recovery her marriage took a turn for the worse [5] but she and Kayce overcame their problems and eventually started to live on his home ranch. [6]

When Monica and Kayce were on bad terms and she had to go in physical therapy, Monica took her relationship with her therapist Martin to the next level. It did not last, however, as Monica and Kayce gave their marriage another try. [6]

Click here for the main page of the Montana State University.
After John and Jamie Dutton invite Montana State University president Mel Thompson over for an interview with Monica, she let him know she didn't want to leave her school on the reservation just to have a better pay job. [7] Later on she reconsidered and came to the conclusion she could combine the jobs. She had a talk with Thompson and was appointed as a professor of American History, giving her the opportunity to tell students her version of Columbus's arrival on the American continent. [8]

Check out the table(s) below to find out in which episodes Monica Dutton made an appearance. 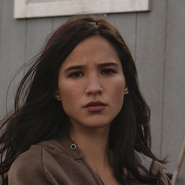