Margaret Dutton is a 1883 and Yellowstone character, played by Faith Hill. She and her husband James are homesteaders seeking a new life in Montana following the horrors of the Civil War.

Click here for the main page of the Dutton family.
Margaret and her husband James were farmers in Tennessee. When they set off for their journey northward they had two children: Elsa and John. John likely is the father or grandfather of John Dutton Sr., who went on to become the father of John Dutton. The latter runs the ranch in the early twenty-first century.

Margaret also had a sister-in-law, Claire, and a niece, Mary Abel, Claire's daughter. Both of them were about to take the journey norhtward with Margaret and her family but Mary Abel was killed by rebelling men that visited their camp and Claire killed herself after the incident. [1] Her husband, Henry, had recently died as well. [2]

After they left their Tennessee home behind James and Margaret had another son, named Spencer.

Margaret took part in the American Civil War. She was a nurse in the Confederate States Army. [3]

Check out the table(s) below to find out in which episodes Margaret Dutton made an appearance. 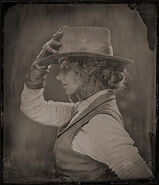 'That Is the Prayer' - Yellowstone - Paramount Network