Lee Dutton is a cowboy/ranch hand, the oldest son of big cattle ranch owner John Dutton and his wife Evelyn Dutton. He is essentially played by Dave Annable, but Kip Denton played a younger version in several flashbacks.

Click here for the main page of the Dutton family.
Lee was born into a ranching family. Before his father John Dutton inherited the ranch, his ancestors had already settled in the Yellowstone vicinity.

John and Evelyn Dutton were blessed with four children: Lee has two brothers (Jamie and Kayce) and a sister (Beth). They grew up together on the Yellowstone Dutton Ranch. Kayce extended the family, marrying Monica Long and having a son named Tate, Lee’s nephew. [1]

His mother died when he was younger. On March 30, 1997 she was out riding with Beth and Kayce and fell off her horse. Help came too late. [2]

One day, Lee and several ranch hands set off to take back cattle that was stolen by Broken Rock Indians. When his father gave the signal from his helicopter, Lee took the men onto the reservation and they tried to turn the cattle. But there was someone on the other side trying his very best to keep the cattle on their side. It turned out to be Kayce, Lee's brother. John also noticed him and called off the operation, ordering his men to retreat.

Before Lee got a chance to ride off he was hit by a bullet coming from the gun of Robert Long. Long came walking over and was about to pull the trigger again, but Kayce was just in time to stop him from doing so, kicking him down. Long didn't give up and tried to shoot Kayce, but Kayce was just fast enough to save himself and kill Long, his brother-in-law. However, the bullet that hit Lee turned out to be fatal. A few days later he was buried at the family grave site. [1] Lee’s body was later dug up and cremated to avoid an autopsy that could point to Kayce as Long’s killer.

Click here for the main page of the Yellowstone Dutton Ranch.
Lee was determined to take over the Dutton family ranch. He worked himself up to the leader of the ranch and kept the ranch hands in line, following in his father's footsteps. [1] 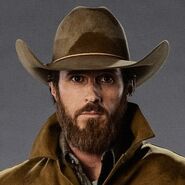 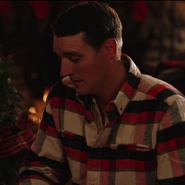 Add a photo to this gallery

Retrieved from "https://western-series.fandom.com/wiki/Lee_Dutton?oldid=15980"
Community content is available under CC-BY-SA unless otherwise noted.