Kayce John Dutton is a horseman and ranch hand, son of ranch owner John Dutton and his wife Evelyn Dutton, married to Monica Long. He is essentially played by Luke Grimes, but Rhys Alterman played a younger version in several flashbacks.

Click here for the main page of the Dutton family.
Kayce was born on April 24, 1990 into a ranching family. Before his father John Dutton inherited the ranch, his ancestors had already settled in the Yellowstone vicinity. John and Evelyn Dutton were blessed with three more children: Kayce has two brothers (Lee and Jamie) and a sister (Beth). They grew up together on the Yellowstone Dutton Ranch.

His mother died when he was younger. On March 30, 1997 she was out riding with Beth and Kayce and fell off her horse. Beth went to look for help and Kayce - young as he was - tried everything to protect her and stop her from dying, but help came too late and she had breathed her last breath when her husband found her. [1]

In July that year Kayce's father met Rip Wheeler, an orphan boy that just killed his father after he murdered Rip's mother and brother. John Dutton welcomed the new boy onto his family's ranch, giving the orphan a home again. [2]

Kayce later started his own family by marrying Monica Long, the granddaughter of Indian elder Felix Long and sister of Robert Long. Kayce and Monica had a son they named Tate and lived on the Broken Rock Indian Reservation. [3]

His oldest brother Lee died when he was protecting the family ranch in a feud with the Reservation. Kayce was on the scene and saw his brother get shot by Robert Long, Kayce's brother-in-law. He had to kill Robert to protect himself and his brother but found out he was too late as Lee's gunshot wound turned out to be fatal. [3]

Kayce served in the military for the United States Navy SEALs. He was in Pakistan during one of his missions and was confronted with a high value target that used his family to protect himself. When the man started shooting he couldn't do anything else but start shooting back, killing not only the man but his wife and daughter as well. [4]

At some point Kayce made it his job to tame wild horses. He did so when he came back from his military service and tried to make a living on the Broken Rock Reservation. [3]

Click here for the main page of the Yellowstone Dutton Ranch.
When his father gave him a chance to come back on the ranch, Kayce went to live in the bunkhouse and started to work his way back in. [5] Later on, his father appointed him as the new foreman of the ranch, succeeding his brother Lee and Rip Wheeler, [6] and he and his family started to live in the ranch house. [7]

Check out the table(s) below to find out in which Yellowstone episodes Kayce made an appearance. 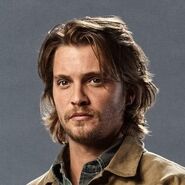 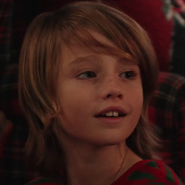