John Dutton III is a Montana rancher. He owns one of the biggest cattle ranches of the United States. He is essentially played by Kevin Costner, but Josh Lucas played a younger version in several flashbacks.

He married and started a family with Evelyn Dutton. On March 30, 1997 she was out riding with two of their children and her horse was spooked which caused it to fall over, causing her to experience a Spinal Injury and significant internal bleeding. Help came too late and she died. [2]

John and Evelyn were blessed with four children: Lee, Jamie, Beth and Kayce. They live and grow up on the Yellowstone Dutton Ranch. Kayce extended the family, marrying Monica Long and having a son named Tate, the grandson of John Dutton. [3]

His oldest son Lee died when he was protecting the family ranch in a feud with the Broken Rock Indian Reservation. Lee’s brother Kayce came too late to help him as he died of fatal gunshot wound by Robert Long. [3]

In July, 1997 John was brought to help deal with a young boy trespassing on a nearby ranch. It turns out the boy, Rip Wheeler, killed his father after he murdered Rip’s mother and brother. John decided to welcome the orphan boy into his family and let him work on his ranch. [4]

Rip and John's daughter Beth became romantically involved after a while and even though they went through some times that they did not see each other much, they eventually got engaged and married, after which Rip officially became part of the family. [5]

When in his 60's Dutton was diagnosed with colon cancer as a tumor made his way into his colon. He was cured by way of operation, having cut two feet out of his colon. [6] He kept it quiet to his family, but his son Jamie was told by Governor Perry and John later confirmed it to him and Beth. [7]

After the operation John visited the hospital for a CT scan. Dr. Fielding wanted to make an appointment for an endoscopy as he saw a mass on the scan. However, John said he had no time and left the hospital. [8]

He didn’t make an appointment, so when things took a turn for the worse and he started coughing up blood, he was brought to the hospital and again had a major surgery. This time he took his doctor’s advice to heart and started physical therapy. [9]

Although his deceased wife Evelyn was the love of his life, John tried to find love elsewhere some time after her passing. He had a relationship with Montana Governor Lynelle Perry, [2] whom he knew since they were growing up together. She also lost her partner, more than 10 years before. [10]

In his spare time John likes to go fishing, sometimes with Carl Reynolds. [7] He also hunts every now and then. [11]

Click here for the main page of the Yellowstone Dutton Ranch.
The Dutton family ranch is everything John Dutton lives for. He does not only own it but is still running it and works on it on a daily basis. It is his wish to keep the ranch in the family, but after Lee’s passing it is hard for him to find a way to let his children take over the ranch, as they all chose a different career path.

Check out the table(s) below to find out in which episodes Dutton made an appearance. 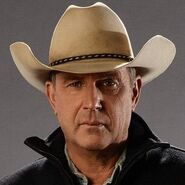 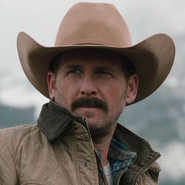