Jimmy Hurdstram is a ranch hand on the Yellowstone Dutton Ranch, one of the biggest cattle ranches in the United States. He is played by Jefferson White in Yellowstone.

Click here for the main page of the Yellowstone Dutton Ranch.
Jimmy started working on the Yellowstone Dutton Ranch, but not out of interest or for his skills. He went through a bad period in life and had gotten himself into trouble when his grandfather got ranch owner John Dutton to give Jimmy a second chance. This meant that Jimmy had to put a branding iron to his chest to prove he was willing to take this opportunity. [2]

He had to prove himself when he started working on the ranch. It didn't take the other hands long to notice he was new to the work and he served as a laughing stock at first. After a certain time, he grew close to Avery, one of the other ranch hands, but before he knew it she was gone from the ranch. [3]

Check out the table(s) below to find out in which episodes Jimmy made an appearance. 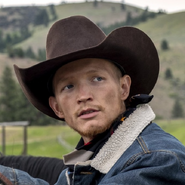