Jamie Dutton, son of big cattle ranch owner John Dutton and his wife Evelyn Dutton, is an attorney. He is essentially played by Wes Bentley, but Dalton Baker played a younger version in several flashbacks.

Click here for the main page of the Dutton family.
Click here for the main page of the Randall family.
Jamie was born in Bozeman, MT, as James Michael Randall to Garrett and Phyllis Randall. His father beat his mother to death when Jamie was three months old. Jamie was then adopted by Evelyn Dutton and her husband John, where he came to live within a ranching family. [1] Before John Dutton inherited the ranch, his ancestors, James and Margaret Dutton, had already settled in the Yellowstone vicinity. Jamie's birth name, however, was given him before adoption, so he is not named after his Dutton forefather.

John and Evelyn Dutton were blessed with four children: Jamie has two brothers (Lee and Kayce) and a sister (Beth). They grew up together on the Yellowstone Dutton Ranch. Kayce extended the family, marrying Monica Long and having a son named Tate, Jamie’s nephew. [2]

His adoptive mother died when he was younger. On March 30, 1997 she was out riding with Beth and Kayce and fell off her horse. Help came too late. [3]

In July that year John Dutton met Rip Wheeler, an orphan boy that just killed his father after he murdered Rip's mother and brother. Dutton welcomed the new boy onto his family's ranch, giving the orphan a home again. [4]

His oldest brother Lee died when he was protecting the family ranch in a feud with the Broken Rock Indian Reservation. Lee’s brother Kayce came too late to help him as he died of fatal gunshot wound by Robert Long. [2]

Some time in the past, Beth asked Jamie for help when she had become pregnant and wanted to get an abortion. He took her to the Indian Health Services' free clinic on the Broken Rock Indian Reservation to keep the surgery as secret as possible. He kept the fact that they would not be able to do it without sterilization from his sister. [5] When she found out, their relationship would never be the same.

Later, when Jamie had started to live with his family, Christina called him and told him they needed to talk. Jamie felt that it was about what happened after their split-up, but did not expect this happening to be the pregnancy of Christina. Soon after telling him, she left and gave Jamie the choice to either start his own family or stay with the family she despises. [7]

Jamie chose to stay with his adoptive family, but when it was revealed to him that he was adopted and that his biological father was alive he distanced himself from the Dutton family to become closer to his real father. When Christina had come to know about this, she decided it was time to reunite. Jamie was then introduced to his son. [8]

After his father applied for him, Jamie went to Harvard Law School to become an attorney, leaving the Yellowstone Dutton Ranch for some time. [9]

When graduated from law school Jamie started working as an attorney at law, eventually helping out his father with legal matters concerning the Yellowstone Dutton Ranch. [2]

Jamie was asked by Governor Perry and Attorney General Stewart to participate in the Attorney General elections. At a certain point there were concerns about John Dutton having too much influence by way of his son, but father and son grew apart and Jamie ran against the wishes of his father.

His father and Beth came up with another participant: Cassidy Reid. [10] Jamie was interviewed by Sarah Nguyen in the heat of battle and he made his father look bad to win votes. [11] But just before the elections he changed his mind as the conflict with his father got too much for him. He therefore withdrew from the elections. [6] Later on Reid was sworn in, after it turned out she ran unopposed. [12]

Click here for the main page of the Yellowstone Dutton Ranch.
When his father gave him a new chance, Jamie went to live in the bunkhouse and started to work on his family's ranch as one of the hands. He started living in the bunkhouse. [13]

Click here for the main page of the Montana Livestock Association.
When the Montana Livestock Association had taken too many liberties in their ways of taking out their enemies, John Dutton had to resign from office. He promised Governor Perry to appoint his successor within week. After Kayce rejected John's proposal, he appointed Jamie to be the new commissioner. [14]

Before Cassidy Reid got a chance to start, Governor Perry found a way to have Jamie in the Attorney General's office as acting A.G. Perry was able to convince John Dutton, so Jamie got the job he had wished for with his father's consent. [15]

Check out the table(s) below to find out in which episodes Jamie Dutton made an appearance. 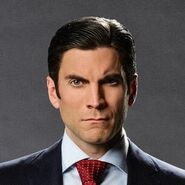 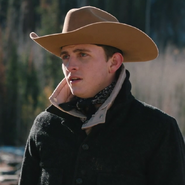