In The Big Valley Heath is one of the top hands of the Barkley family ranch owned by his (step)mother Victoria Barkley. He is portrayed by Lee Majors.

Heath is the illegitimate son of Thomas Barkley, late husband of Victoria Barkley. He had to literally fight his way into the Barkley home. At first the even-tempered but rough and tumble Heath was angry and aggressive due to his belief that his father had abandoned his real mother after she became pregnant as well as the resistance he initially received from some of his new siblings. In truth, Tom Barkley never knew about Heath as Heath's mother had never told him, and never told Heath until she was on her deathbed.

He gradually gained acceptance from the rest of the Barkley clan and became as much a "Barkley" as the rest of the family. Heath came to call Victoria "Mother" when speaking to her directly and about her with his siblings. Although his (half) brother Nick was initially leery of him and felt he had to test his mettle, Heath proved himself worthy of Nick's acceptance, and eventually Nick seemed to grow even closer to Heath than he was to his brother Jarrod, perhaps in a sense due to Heath having more in common with him than did Jarrod.

Heath is a veteran of the Civil War. He served as a soldier in the Union Army in combat operations in New Mexico and was held as a prisoner of war for seven months by Confederate forces. 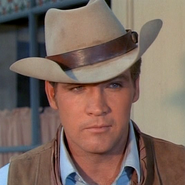