Actor
Smith as Lloyd in Yellowstone

Yellowstone
Forrie J. Smith is an actor who made appearances in several western series and is probably best known for his role as Lloyd in Yellowstone. His son Forrest played a younger version of the character in the same series.

In this series Smith appeared as Yellowstone Dutton Ranch hand Lloyd. Check out the table(s) below to find out in which episodes he made an appearance. 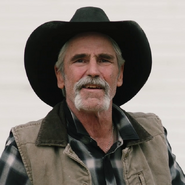