The Ghosts of Paradox

Big Twin is the oldest of the twin brothers of the Monroe family. After his father and mother Albert and Mary Monroe drown while crossing a river, he, and his brothers and sisters, have to make it on their own. The two oldest, Clayt and Kathy, take the lead.

Big Twin is a character of The Monroes, portrayed by Keith Schultz.

Check out the table(s) below to find out in which episodes Big Twin made an appearance. 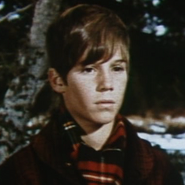