Audra Barkley, played by Linda Evans, is Thomas and Victoria Barkley's only daughter. Audra is somewhat immature, self-absorbed, bold and forward. Far from demure, she performs daring stunts and rides astride, like her brothers. Like her brothers Nick and Eugene, Audra was initially leery of Heath's story that he was her father's son. She even went so far as to seduce Heath to expose him as a fraud, but was unsuccessful. After a while Audra and Heath became closer and they have a good brother-and-sister bond. - Source: Wikipedia 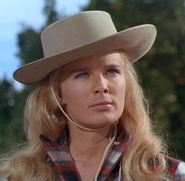 The Big Valley - A Noose Is Waiting - The Rope
Community content is available under CC-BY-SA unless otherwise noted.
Advertisement